Nate is a 7th generation San Franciscan and is Vice President at Stars, the Agency. He chose The Historic Balboa Theatre for a portrait. The Balboa Theatre was originally built in 1926. In 2011, to help preserve one of the city’s last remaining neighborhood theaters, ownership of the theater transferred to the San Francisco Neighborhood Theater Foundation. The theater now operates under CinemaSF, which also runs the Vogue Theater. In 2013, the Balboa Theatre successfully completed a kickstarter campaign to convert its projectors from film to digital. As a gift for his donation, Nate has his name engraved on one of the seats inside the theater.

Special thanks to Adam Bergeron and Joel Goulet for allowing us inside the theater between showtimes for a photo.

Neighborhood he grew up in: “I grew up in the Outer Sunset on 41st Avenue and Lincoln. Right near Golden Gate Park and Ocean Beach. It was cool growing up so close to those special places. They were really my backyard. During summer vacation growing up we used to walk to the beach and swim in the ocean or climb trees and play stupid war games in the park almost daily. In retrospect it’s amazing how much fun could be had for free so close by. We’d also go the the ice skating rink on 48th avenue or play video games at the Musee’ Mechanique when it was still at The Cliff House. All that stuff was walking distance from where I lived.”

I like your project because half the people that have come here don’t even know there are any real natives (I mean born and raised in San Francisco). Thanks for helping remind people that we’re here – that we’ve been here.

I chose The Historic Balboa Theatre because I love movies and it’s my favorite movie theater in The City. I like the character it has. I used to cut class in high school and just walk down the street and watch a matinee. I’ve seen tons of movies there over the years. I like that it’s been there since 1926. In many ways it’s like a native itself and those multiplexes are the newbies to town. I like to support the Balboa because I enjoy seeing movies there and I want it to thrive. It’s a beautiful landmark for the area. 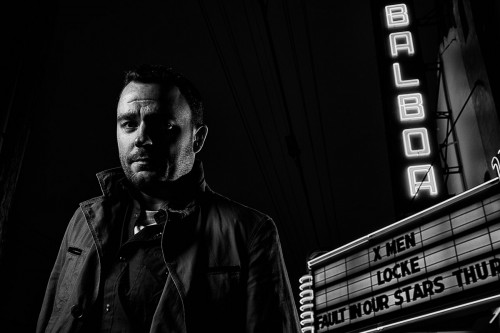